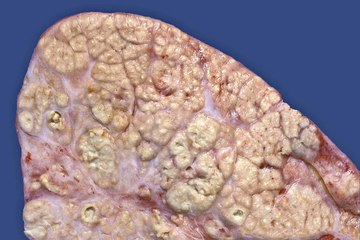 Note the extensive involvement on the granulomatous inflammatory reaction. The lung lobules can still be recognised and cause the specific pattern of the lesions.  Also note the marked interstitial fibrosis seen in certain areas of the lung. The exudate is mostly solid, caseous and inspissated, but in some of the lobules it became liquified because of the infiltration of neutrophils into the affected tissue.  Large cavities in the lungs caused by tuberculosis as seen in humans and some other species such as baboons and vervet monkeys, do not occur in cattle and buffaloes because of the distinct lobular pattern of the lung that is retained following even a severe inflammatory reaction as in this case.